Ironman Triathlon. 3.8km swim. 180km cycle. 42km run in one day. For the outsiders, this is pure madness.
It was impossible for me too. And then I did it.

In 2016 I didn’t know anyone who finished Ironman. I would watch tons of triathlon related videos on youtube, I would follow Kona updates, and I would secretly envy those with IM branded backpacks and tattoos. I thought about them as superheroes.
And then I have signed up. It wasn’t a well-thought decision. That night I had some wine, my wife was far too enthusiastic, and I had only 3 months for the preparation. With no previous background in the endurance sports, if I asked a coach about the opinion, they would stop me. They would say I should postpone it until the next year and get some experience first. And it would be a very sensible decision. My dad was even worst, he openly admitted he was afraid of my life. He said to me that I may die trying. Thanks, Dad!

Sometimes you have to take a jump. Commit. And then you will find the way.

A couple of months after Ironman Barcelona, my best friend, who is a fast marathon runner, signed up with me for another race.
He was like me, thinking that he is not fit enough, waiting… And then he saw me, an ex-handball player, who has never run a marathon before, finishing in 12h.
He thought to himself ”If Lez can do it, and I know he cannot run for shit, I want to have a shot too!”.
We did Copenhagen in 2017. And then in 2018, my friends, Barbara, Joanna (my wife and business partner) and Dave have joined our little IM group.
And again, with no previous background, and they all finished. IM Italy was a blast!

What I am trying to say is… don’t wait until it is too late; if your friends told you that it is impossible, find new friends who will support your crazy dreams.
And If you have any questions, ask. I have learned tones on my mistakes, and there is no need for you to fall in the same traps.
Good luck and enjoy!

Whatever crazy adventure is waiting for you, it will be worth it! 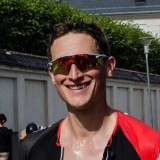